Located in southcentral Wisconsin, Riverland Conservancy’s Merrimac Preserve offers 1,642 acres of land to explore and enjoy. The property contains a variety of features including wetlands, prairies, savannas, forests, lakes, and streams. The terrain found at the Merrimac Preserve is gently rolling, while the steep and rugged Baraboo Hills provide a stunning backdrop. The preserve is open to the public for low impact recreation including hiking, birding, fishing, snowshoeing, and skiing. Come hike the trails and appreciate the solitude of this wild and open landscape.

Want to visit the Merrimac Preserve?

Want to support the Merrimac Preserve?

Donate
The Merrimac Preserve contains a number of different habitats. Wetlands prevail through the low-lying center of the property and along stream corridors. The surrounding uplands are a mix of prairie, oak savanna, and forest communities.

The Merrimac Preserve contains both restored and remnant plant communities. The majority of the preserve had been altered from its natural state by farming practices, homesite development, and other human activity.  However, some areas of the preserve were not highly altered by modern human activity. These areas are referred to as remnants. Although they may be degraded, remnants still contain many of the wetland, prairie, and savanna plants that existed before European settlement. These areas offer a glimpse of the past and often harbor rare species of plants and animals. Remnant plant communities you may encounter at the Merrimac Preserve include southern sedge meadow, calcareous fen, shrub-carr, alder thicket, oak barrens savanna, oak opening savanna, dry to dry-mesic prairie, and dry to dry-mesic forest.

Riverland Conservancy’s goal is to preserve and enhance the remnant plant communities and to restore the areas that have been altered.  Although we still have a lot of work to do, we have made significant progress toward this goal.  Over time, Riverland Conservancy has phased out agricultural practices at the preserve. As of 2018, all of the former crop fields, over 600 acres in total, have been planted to native prairie species. These prairie restorations provide habitat for many species of wildlife and prevent soil erosion. Wetlands that were formerly drained for farming purposes have been restored by plugging drainage ditches and disabling drain tiles. These restored wetlands store and filter large quantities of water which improves downstream water quality and reduces flooding.  Our on-going land management activities will continue to improve the health and biodiversity of this special place.

Two cold-water streams run through the Merrimac Preserve. Manley Creek enters from the northwest and Parfrey’s Glen Creek enters from the northeast. Both streams originate in the Baraboo Hills. The two streams merge in the center of the preserve. Manley Creek is designated a Class I Trout Stream by the Wisconsin Department of Natural Resources and has a naturally reproducing brook trout population.  Extensive restoration work has been completed on Manley Creek since 1997, further enhancing its trout habitat.

After it’s confluence with Parfrey’s Glen Creek, Manley Creek flows into Gallus Slough.  Gallus Slough is a shallow water body that was created with the impoundment of the Wisconsin River by the Prairie du Sac hydroelectric dam. Alliant Energy is required to maintain ownership of Gallus Slough and the surrounding shore due to its operation of the dam. Alliant Energy currently allows public access on this property and has protected this land with a conservation easement held by Groundswell Conservancy.

Sandhill Lake is located in the northeast corner of the Merrimac Preserve. This manmade lake was created as part of a residential subdivision planned for the area. Riverland Conservancy purchased 7 of the 9 lots in this subdivision.  Sandhill Lake is home to many turtles, frogs, fish, and beavers.

Numerous small ponds speckle the Merrimac Preserve. Some of these are natural water bodies, but many are wetland scrapes that were created to provide additional shallow, open-water habitats that are preferred breeding locations for many species of waterfowl.

The wetlands, grasslands, and forests of the Merrimac Preserve provide critical habitat for a variety of wildlife. The preserve also provides an integral wildlife corridor between the Baraboo Bluffs and the Wisconsin River. Common species that reside at the Merrimac Preserve include whitetail deer, wild turkeys, racoons, rabbits, coyotes, snapping turtles, and opossums. If you’re lucky, you may also catch a glimpse of the more elusive species that live at the preserve including bobcats, badgers, beavers, Blanding’s turtles, and Sandhill cranes.

The Merrimac Preserve and adjacent Alliant Energy property around Gallus Slough provide over 2,000 acres of contiguous habitat. Much of this land is open or shrubby grassland and wetland, which provides critical habitat for grassland birds. Grassland bird populations in North America have experienced drastic declines over the past 50 years, largely due to habitat loss. Maintaining and improving this open habitat is a goal at the Merrimac Preserve, especially for the benefit of grassland birds.

We have conducted several bird surveys at the Merrimac Preserve over the years. It is estimated that in most years there are 95-100 different species of birds that use the preserve during the breeding season, including several species that are listed in Wisconsin as Threatened or Special Concern. Additional species utilize the preserve for stopover habitat during migration.

The Merrimac Preserve occupies a fascinating geologic area at the very edge of Wisconsin’s Driftless Area and below an ancient mountain range.

The most recent period of glaciation in North America is known as the Wisconsin Glaciation. About 100,000 years ago, Earth’s climate cooled and a glacier, named the Laurentide Ice Sheet, began to cover North America. This glacier reached northern Wisconsin about 26,000 years ago. Eventually, the Laurentide Ice Sheet flowed over the east end of the Baraboo Hills, as well as the Merrimac Preserve, and into both ends of Devil’s Lake Gorge where it finally stopped about 16,000 years ago.

The final extent of the glacier’s advance is marked by a feature called a terminal moraine. As glaciers move, the flow of ice pushes and accumulates rocks, gravel, and other debris at its edges. When the glacier stops advancing and begins to melt, this debris is deposited in a large, conspicuous ridge (a moraine). The large, moraine that marks the final extent of the glacier into the east end of Devil’s Lake gorge can be clearly seen from many vantage points of the Merrimac Preserve. On the other side of the Moraine, Wisconsin’s Driftless Area begins. The Driftless Area of Wisconsin has never been glaciated, and because of this, retains its rugged and hilly topography.

By 9,500 years ago, the climate had warmed enough for the glacier to melt and retreat from Wisconsin. Both the Laurentide Ice Sheet as well as the large amount of meltwater flowing from it greatly altered the landscape. Rivers charted new courses. Historic glacial Lake Wisconsin was formed and subsequently drained. The Dells of the Wisconsin River were cut by rushing meltwater. And the rolling topography of the Merrimac Preserve was shaped.  The soils of the Merrimac Preserve consist of glacial sediment: a mixture of clay, silt, sand, and gravel that was deposited by the glacier.

The Merrimac Preserve lies just south of the Baraboo Hills. In contrast to the relatively young glacial deposits, the (North and South) Baraboo Ranges, were formed around 1.6 billion years ago. This makes them one of the most ancient rock outcrops in North America.  The longevity of the Baraboo Hills can be attributed to the extreme durability of the Baraboo Quartzite that they are composed of.

According to the Wisconsin State Historical Society, this area was used extensively by Native Americans due to its close proximity to the Wisconsin River. There are three archeological sites on record from the Merrimac Preserve. Two sites were workshop or campsite areas from unknown prehistoric eras.  Lithic (stone) artifacts were found at both of these sites and, in 1929, 12 hearths were reported to have been excavated from one of them.  The third archeological site is a bear-shaped effigy burial mound, named the Devil’s Nose Effigy, from the Late Woodland era (AD 400-1100).  The Devil’s Nose Effigy was originally located in 1906, but subsequent surveys have not been able to relocate it, and it is assumed to have been destroyed.  All three sites are considered to be degraded due to agricultural practices that occurred on the property. Original survey notes from 1842 also mention several effigy mounds in the area, and describe their shape.

The Merrimac Preserve features over 9.5 miles of maintained hiking trails including 5 designated loop trails as well as a 3.7-mile segment of Wisconsin’s 1,000-mile Ice Age National Scenic Trail. This trail generally traces the farthest extent of Wisconsin’s last glaciation and highlights the unique landscape features that were left as the glacier retreated over 10,000 years ago. The portion of the Ice Age Trail that crosses through the Merrimac Preserve provides an important link from Devil’s Lake State Park to the Village of Merrimac. From there the trail crosses Lake Wisconsin via the Merrimac Ferry and connects with the Lodi segment of the trail.

Several bridges and boardwalks have been installed at the Merrimac Preserve to allow visitors the ability to cross wetlands and streams while keeping their feet (mostly) dry. A wooden observation deck is located on the western side of the property and provides a pleasant place to stop and enjoy the surrounding scenery.

Several buildings still stand at the Merrimac Preserve, including a gothic-arch barn. These buildings are relics of the former farmsteads that are an important part of the history of the property.

Click on the images below to identify some of the wildflowers you may encounter at the Merrimac preserve. 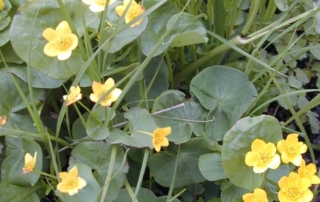 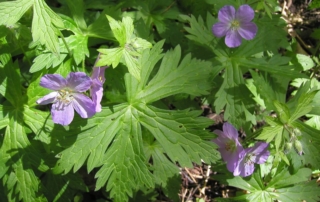 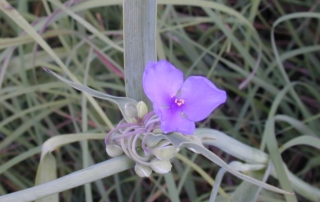 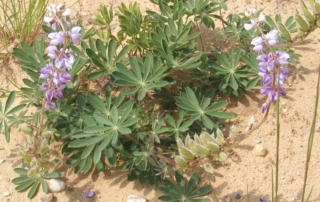 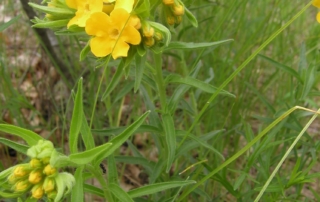 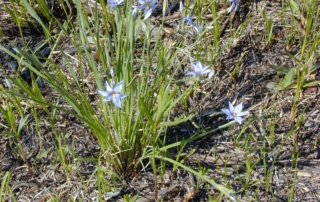 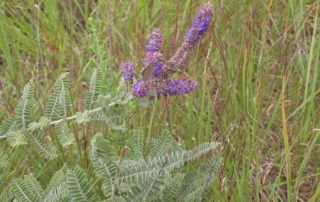 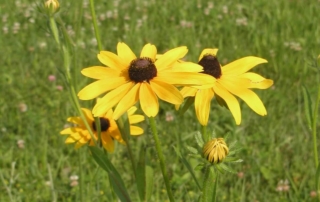 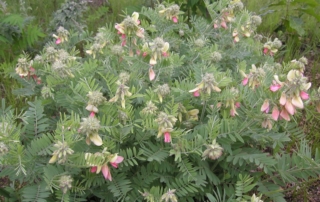 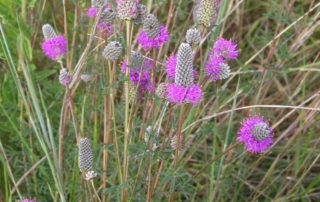 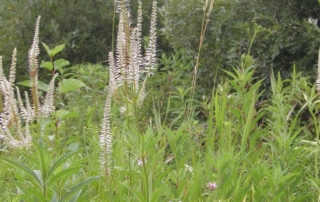 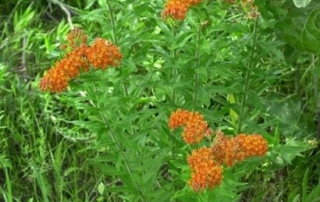 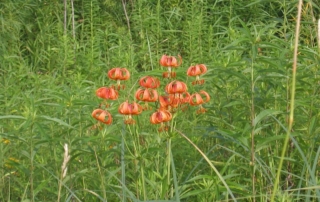 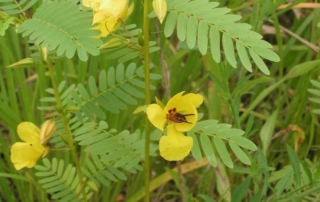 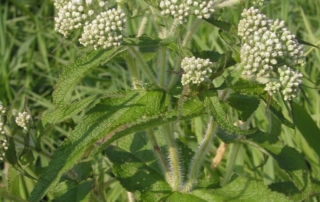 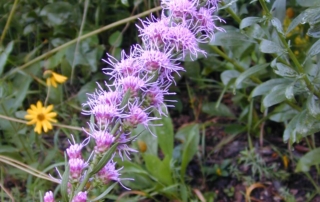 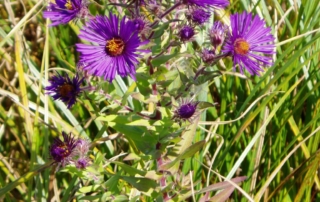